Should we be concerned about high wheat prices? 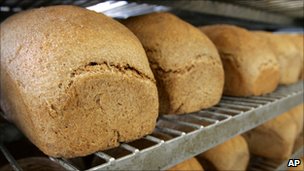 Judging by some of the doomsday newspaper headlines about "soaring" and "surging" wheat prices, you might have thought bread may soon become a foodstuff reserved for the upper crust.

Or that a margherita pizza is set to be the new caviar, and pasties may only be available on the black market.

The dire warnings of rising food costs came following the news that wheat is just the latest agricultural commodity to see prices soar, rising by its highest amount in 37 years.

Sparked by drought and fires destroying crops in Russia - the world's third-largest wheat exporter - the biggest monthly increase in the cost of wheat since 1973 has caused bread producers to warn they may have to pass on price increases.

We were also told that chicken, pork and beef prices will soar as well, because wheat is a key component of animal feed.

But behind the initial knee-jerk reaction to wheat prices going up by 50%, is there really any reason to be concerned? Or is it instead just a blip?

Like anything bought and sold the price of wheat is subject to the relationship between supply and demand.

And with the current Russian crop due to be significantly lower because of the adverse weather conditions - at a time when global demand for wheat remains stable - it was perhaps inevitable that worldwide wheat prices would rise.

"We can quite safely say that the general direction for wheat prices is up," says Neil Saunders, consulting director at Verdict Research.

"The question for the consumer is how long wheat prices remain elevated.

"The longer they do, the more likely it will put an upward pressure on a lot of food products.

"But for the time being, I can't see prices rising much due to the competition between the supermarkets - they are all very, very conscious about price because they want to protect their market share."

A spokesman for Sainsbury's says that "in an effort to minimise the impact of any changes in the commodity markets we work closely with our suppliers on long-term contracts".

He adds: "This provides stability and continuity, not only for Sainsbury's, but also our suppliers and our customers."

Although Russia was the world's third-largest wheat exporter last year, commodities analysts point out that the key factor going ahead is the forthcoming crops of the world's other biggest wheat producers. 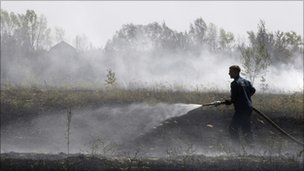 If these crops are above average, then global prices could quickly fall back again.

But if they are also much lower than expected, then wheat prices may rise even further.

However, the wider picture is far from black and white.

While the next wheat crops in the US and Australia are expected to be well above average thanks to favourable weather conditions, Canada is warning that its coming harvest will be much smaller because of the impact of torrential rain.

The Canadian Wheat Board's chairman, Allen Oberg, has described the situation as "devastating", saying the rain was so heavy in some areas that farmers couldn't even plant their seeds.

In the UK, the National Farmers Union (NFU) says the current wheat crop has had to deal with the driest first six months of a year since the 1930s.

However, he adds that any fall in production will be "nothing like the extent seen elsewhere in the world for the 2010 harvest".

"At the moment there is still a lot of uncertainty in the market," he says. "For example, we won't know the exact situation in Russia until [after harvesting] in September and October.

"But we have to remember that we have just come out of the back of two of the largest wheat harvests on record - 2008 set a new record, and 2009 was the second highest.

"As a result, there are substantial global wheat stocks, and the US, for example, has the highest level of supplies in 23 years."

Mr Bos adds that inflation also remains weak in the general economy, so wheat prices are not being pushed upwards by wider price rise pressures.

So if the current concern about wheat supplies has been exaggerated, what has caused the price to spike so strongly after the crop warnings from Russia? 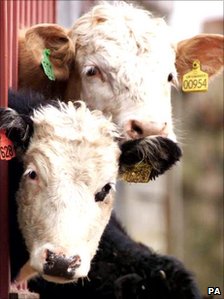 By that he means investors who are buying up wheat on the global commodity markets in the expectation that prices will rise still further - in part as a result of their purchase squeezing supplies - and that they will be able to make a profit as a result.

"It looks like one of those cases where speculators are overriding the fundamentals of supply and demand," he says. "And as a result, the increase in the global price of wheat is being exaggerated.

"This will possibly continue to cause further short term increases in the price of wheat, but I don't think this will last, even if Russia does reduce its exports.

"The speculators see this as a way to make money, but some could end up getting their fingers burnt [losing money].

"The fact is, the world market remains very well supplied with wheat."

It is also important to note that while the price of wheat on global markets has indeed posted its biggest monthly rise in 37 years, we have only returned to prices last seen in the first half of 2008, so we are not in uncharted territory.

And then you need to remember that the wheat content of a UK loaf of bread generally still costs no more than 15 pence of its overall price, so analysts estimate that any short-term rise in wheat prices would only add an average of 5p to the cost of a British loaf.

But if the current rise in the price of wheat as a result of the drought in Russia is indeed a blip, you should still not ignore the longer term picture - overall global food prices have risen by an average 83% in the past 10 years, according to the Food & Agriculture Organisation of the United Nations.

Mr Saunders of Verdict says this increase has primarily been fuelled by the growing wealth of populations in developing countries such as China, India and Brazil meaning they can afford to eat more meat.

At the same time, a fast-growing world population, the increased demand for biofuels, and the likely impact of global warning on has further pressure on crop supplies.

This led to food riots in 2008 in a number of poor and developing countries.

And prices of other crops such as maize and cotton have also risen strongly in recent months.

So while the current spike in the price of wheat may only be just that, and prices are likely to soon fall back, looking ahead the longer term trend will likely only be upwards.

We love to see what you've been baking, but are just updating this section at the moment - we will be able to accept new community recipes in the near future, please don't try to upload in the meantime as we won't be able to accept the photo or send a voucher yet.

If you add one of your own baking recipes with a photo to the Shipton Mill website, we will send you a voucher for 5% off your next order from the Flour Direct shop.

It's very easy, just click here to visit your " My Shipton Mill" page to get started.